During my research on the AWS IAM Authenticator component, I found several flaws in the authentication process that could bypass the protection against replay attacks or allow an attacker to gain higher permissions in the cluster by impersonating other identities. In this blog post I will explain about three vulnerabilities detected in the AWS IAM Authenticator where all of them were caused by the same code line. Two of them have been there since the first commit (Oct 12, 2017) and the third one that enabled impersonation was exploitable since Sept 2, 2020, release v0.5.2.

AWS’s EKS team applied a fix to all EKS clusters on AWS and sent the fix to Kubernetes SIG as well. The open-source code for aws-iam-authenticator is now updated and includes the fix. Anyone who uses EKS Anywhere or uses the vulnerable version of the aws-iam-authenticator code should update the cluster.

From the day Amazon EKS was launched in 2018, it included native support for AWS IAM users and roles as entities that can authenticate against a cluster. The authentication relays on the GetCallerIdentity action in AWS Security Token Service (AWS STS), which returns details about the IAM user or role whose credentials are used to call the operation. This authentication flow is implemented and performed by the AWS IAM Authenticator for Kubernetes tool called aws-iam-authenticator. The aws-iam-authenticator tool development started as an open-source initiative to create a mechanism that uses AWS IAM credentials to authenticate to Kubernetes cluster, and eventually was donated to the Cloud Provider Special Interest Group (SIG). The project is currently maintained by Amazon EKS Engineers.

AWS IAM Authenticator for Kubernetes can be installed on any Kubernetes cluster, and it is installed by default in any EKS cluster both on AWS cloud and on-premises (Amazon EKS Anywhere). In case the cluster infrastructure is managed by the provider, the end user cannot access the control plane resources including the API server pod. Since the AWS IAM Authenticator is deployed in the control plane as well, the end user cannot access its resources in a managed EKS cluster, but it is possible to view its logs in CloudWatch.

In any case of access denied, an invalid signature, or other errors during the validation process, an error message will roll back to the user.

I created a fresh EKS cluster “gaf-cluster” and enabled logging for the AWS IAM Authenticator.

I updated my ~/.kube/config file using the following command (kops does it for you):

When I run a kubectl command, for example “kubectl get pods”, the following request is sent to the EKS cluster’s API server:

As you can see, a token is generated and being sent with the request. Here is the output of the base64 decoded value (without the k8s-aws-v1 prefix):

This is a signed request to STS. The API server will take this value, forward it to the AWS IAM Authenticator server which will base64 decode the token, run some checks, and use the signed request to get the identity ARN from STS service. Some of these validation checks on the token content are:

There are more checks being made, but these are the relevant ones for the findings.

After the AWS IAM Authenticator server completes the mapping, the resulting identity has a Kubernetes username and groups that will be used inside the cluster and enforced by the RBAC rules.

Here is a log from the AWS IAM Authenticator server after completing a mapping:

It is critical to check the parameters’ names and values to avoid security issues caused by their manipulation. Here you can read about such vulnerability discovered by Felix Wilhelm where he exploited the HashiCorp Vault by manipulating the STS action.

In AWS IAM Authenticator, an attacker could craft a malicious token with any action value. Since I could not find a way to control the host or add other parameters to the request, the impact of changing the action is low.

2 – Sending a malicious token without signing the cluster ID header

The cluster ID is a unique-per-cluster identifier that prevents certain replay attacks. If you managed to obtain an STS GetCallerIdentity request that belongs to someone else, you cannot use it to authenticate the EKS cluster on behalf of that user because the cluster ID header is not signed as part of the request.

In AWS IAM Authenticator, an attacker could craft a malicious token without signing the cluster ID. This token was accepted by the AWS IAM Authenticator server and did not cause an error on STS, therefore, it bypasses the replay protection for cases where we have clean STS GetCallerIdentity request (not signed for another cluster).

The users can add mappings to the “aws-auth” ConfigMap that includes the {{AccessKeyID}} placeholder, which will be replaced by the server during the mapping evaluation. 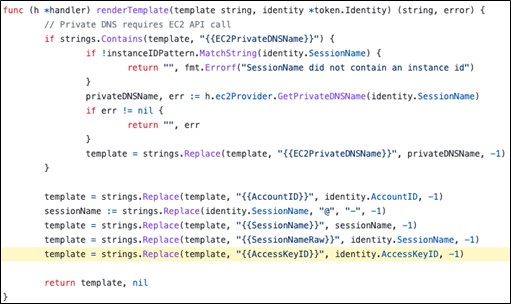 Here is an example of such mapping in the “aws-auth” ConfingMap. Assume the cluster administrator defined the usernames in the cluster after the AWS access keys. I will add a mapping to “gaf-cluster” for “gaf_test” IAM user.

Now, when I use “gaf_test” IAM identity, the Kubernetes mapped username will match the access key.

This can lead to privilege escalation in the EKS cluster.

Here is a Python script that generates all three types of malicious tokens:

import base64
import boto3
import re
from botocore.signers import RequestSigner


Note: You might need to send the request with the malicious token to the EKS API server multiple times. The reason is further explained in the root cause section.

All three security issues happened because of this code line.

In the code above an attacker can send two different variables with the same name but with different uppercase, lowercase characters. For example, "Action" and "action".

Because the for loop is not ordered, the parameters are not always overridden in the order we want, therefore we might need to send the request with the malicious token to the AWS IAM Authenticator server multiple times. The vulnerable root cause was in AWS IAM Authenticator since first commit (Oct 12, 2017), therefore both changing action and unsigned cluster ID tokens were exploitable since day one. The exploitation of the username through the AccessKeyID was possible since Sept 2, 2020 (release v0.5.2) when this feature was added.

The EKS team added a function to validate that there are no duplicated parameters names. 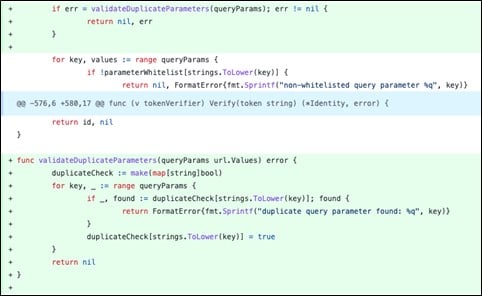 Gafnit Amiga is the Director of Security Research at Lightspin. Gafnit has 7 years of experience in Application Security and Cloud Security Research. Gafnit leads the Security Research Group at Lightspin, focused on developing new methods to conduct research for new cloud native services and Kubernetes. The Group works closely with the part of the engineering team dedicated to the product's detection and remediation capabilities. Previously, Gafnit was a lead product security engineer at Salesforce focused on their core platform and a security researcher at GE Digital. Gafnit holds a Bs.c in Computer Science from IDC Herzliya and a student for Ms.c in Data Science.